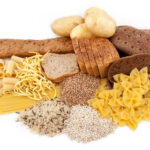 Starch is a polysaccharide formed by units of glucose and the storage form of carbohydrates in plants.
It is synthesized by the most part of vegetable cells and stored especially in seeds (e.g. cereals and legumes), tubers (e.g. potatoes), roots (e.g. those of carrots) and some fruits (e.g. green banana). With sucrose and lactose, it is one of the three most common carbohydrates taken up with diet and, among the previous ones, is the main source of carbohydrates in a Mediterranean-type diet.

It is present into vegetable cells and contains two types of homopolysaccharides, amylose and amylopectin.

Depending on the different velocity and degree of hydrolysis by alpha-amylase, starch can be classified in three classes:

RS can in turn be classified in: